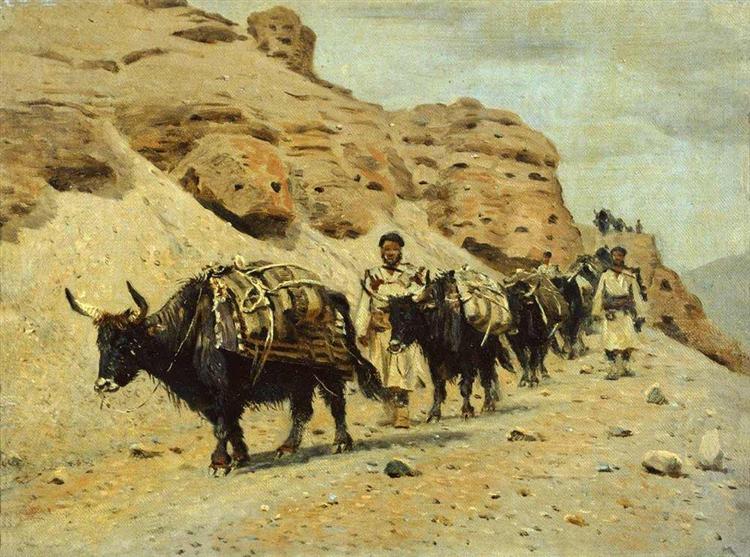 In this, my first article written specifically for The New Polis, I want to focus on the theme of endurance, particularly as it relates to notions of Indigeneity that I will argue are necessary to the theoretical space of this journal and online platform.  This will be the first of several posts regarding the subject.

We encounter the necessity to think of Indigeneity in current discussions of boundaries and borders, both spatial and virtual. These discussions present themselves as crises and require a rigorous distinction between criticism and theory.

Criticism responds to emergent crises.  It is different than theory, which implies a way of seeing.  Indeed, in the word’s earliest cognates there is a tension between seeing or “to perceive” as ‘man’ (ver) and “theo” as godlike, or god-given, possibly from the verbal notion of “to set, put.”  Criticism as an act of judgment may be undergirded by a theory or set of theories, conscious or unconscious.

If I briefly take the strain related to ‘wer’, which in Old English means ‘man’ but in Proto-Indo-European can mean 1) “to raise, lift, or hold suspended” 2) “to turn, bend” 3) “to perceive or watch out for,” or 4) “to cover.”  The fluctuating poetics of the cognates pushes nouns back into verbals and verbs themselves, so unsurprisingly the word, ‘verb’ itself, betrays its own dynamic cognate.

Weariness and exhaustion exude from travelers, exiles, and refugees. Yet being wary and watchful undergirds theorizing, which itself is dynamic, and necessary to human life.  When spoken of in relation to seeing, theory becomes spatialized and emplaced, settled; and Indigeneity is inherently about place, and nostalgia is homesickness, a disease catalogued in modernity.

The emphasis on turning words and speaking was undoubtedly on the mind of Aristotle, who made ‘man’ the political animal.  Hamlet turning Yorick’s skull comes to mind. It builds, however, on the spatialized notions of the polis and visual boundaries, as the theme of the khôra emerges in Plato and reiterates in Martin Heidegger, Jacques Derrida, and Julia Kristeva.

The “new polis” addresses the state of context collapse and entropy.  The exigence of the situation demands that we look at emplacement watchfully, and that critical theory be aware of refractions inspiring it.

Julia Kristeva importantly described the khôra as prior to the symbolic instance of utterance rather than as the spatial “outside the boundary” that establishes the polis and the agora.  For her, liberating the khôra from the realm of the symbolic produced the Revolution in Poetic Language by pushing toward the semiotic.

This intellectual move toward postructuralism in the late 1960s and early 1970s simultaneously spoke to an interrogation of the anthropology and archaeology of the State and society that deterritorialized language, and the emphasis on writing, the “zero degree,” semiotics, and what Derrida called the subjectile – these all poeticized the shift to an emphasis on medium, “the body,” etc. that would occupy much late twentieth-century thought, as texts became textualities.

It was a poetics of exhaustion and failure that underwrote so much of 1968, as the depletion of physical resources gave way to virtual forms of globalization and finance capital, the internet…yawn! And lifestyle as exploited labor has been part of the caffeinated hum of the spirit of capital.

As philosophers, posthumanists, and transhumanists alike grasp at the borders of human capaciousness, animality, and monstrosity, they continue emitting and churning their desiring machines.  Being constantly “on the move,” we dwell in the exhaustion of energy.

In his recent book, The Theory of the Border, Thomas Nail proposes a four-fold description of the border as 1) In between 2) In motion 3) A process of circulation 4) Not reducible to space. Yet, he writes:

The border is an absolutely positive and continuous process of multiplication by division— the more it divides social space the more it multiplies it. It is thus important to distinguish between two kinds of division: extensive and intensive. The first kind of division (extensive) introduces an absolute break— producing two quantitatively separate and discontinuous entities. The second kind of division (intensive) adds a new path to the existing one like a fork or bifurcation producing a qualitative change of the whole continuous system. (3)

While reminiscent of Bergsonism, the hovering specter of la durée enduring in the “forking,” Nail particularly remarks on the relationship between the perpetual motion of the border in relation to “a radicalization” of Karl Marx’s theory of primitive accumulation of capital (22). Nail claims that in broader human history, migratory movement is the constant, rather than an aberration from the norm; and the history of the border is the history of social movement.

A kind of binary persists in his philosophical attempts at definitions of border theory, a binary that ethical philosophers such as Emmanuel Levinas might resist as being too “nominative.”  Nail writes:

In particular, Marx identifies this process with the expulsion of peasants and indigenous peoples from their land through enclosure, colonialism, and antivagabond laws in sixteenth-century

Readers are likely to encounter Nail’s work in the political turmoil surrounding refugee crises, and indeed, the U.S. border with Mexico appears to be his central example.  While I like much of what Nail has to say, I am also struck by how little attention he gives to the notion of Indigeneity.  In fact, I am concerned that his theory of the border unwittingly continues a colonial impulse that seeks to erase Indigenous peoples.

I am not claiming that Nail’s theory ignores Indigenous erasure. Instead, I emphasize the statement: “Without the expulsion of the people, there is no expansion of private property and thus no capitalism.”  Indian removal, I believe Nail would agree, is indicative of the advance of capitalism.

At the same time, if humans are inherently migratory, as he suggests, distinctions between Indigenous and non-Indigenous peoples become obscured by the overwhelming threat of capitalism to remove us all in waves of post-apocalyptic forced migration.  Forcing “humanness” on us in order to exploit labor, we are quickly exhausted as we are sacrificed to the spirit of capitalism.

But there seems to be an inherently European predation at work in traditional theorizing necessitating more current and rigorous concepts of Indigeneity – not to be confused with appropriation of Indigenous peoples – is critically necessary.  A host of ethical problems arise in this discussion, and naming appropriation as a problem doesn’t make it go away.

In contrast to Nail’s dynamic border thesis, the Osage theologian and historian, George “Tink” Tinker, has argued the irrelevance of euro-christian dichotomies being imposed upon Indigenous peoples, including the Christian category of ‘religion’ itself.  This thinking flips the script on the euro-christian notions of Indian “savagery” and nomadism, a conflated stereotype of Arabic Muslim “Saracens” projected onto Indigenous American peoples.  Tinker emphasizes locality and balance as essential to Native American identity:

By local and cosmic we mean to say that Indian folk experience their own place at the center of a cosmic whole, but that their experience of the cosmos is not an experience they would be in any way tempted to impose on other peoples who experience the cosmos in other local places.  To that extent, Indian communities were never evangelical or proselytizing. (207)

Thomas Nail’s useful and multivalent approach to theories of the border and his observance that borders are never fixed, nor purely spatial, indicates the “back-and-forth” movement with respect to thinking the border, a capitalist vacuum cleaner moving back-and-forth over a territorial carpet.

One could easily claim that the concept of Indigeneity is the product of colonialism itself.  Surely Indigeneity as a pan-Indigenous function is indeed on some level a reaction-formation against the oppression of European powers and their derivatives.  Embracing pan-Africanism, Frantz Fanon long ago claimed that decolonization is inherently violent.

Being sucked up into the virtual poetics of post 1960s deterritorialization, Indigenous identities merely become another iteration of ressentiment.  Simply noting the context collapse between spatialized and conceptual borders is a deterritorializing observation.  In this way, the poststructural move was complicit with ongoing euro-christian colonization. It was a spiritualizing affair.

If identities are merely repeated iterations, then Indigenous identities become merely interchangeable with any other human identity category, tools of neoliberalism.  If “we’re all essentially migrants” then no one can justify a local cosmos.

Correcting this impulse toward Indigenous erasure requires thinking of Indigenous peoples as different without the trappings of euro-christian forms of naming that underwrote racial distinctions as part of emergent colonialism and capitalism that produced “primitive” accumulation.

Within the United States, Native Americans suffered from notions of property and greed through the importation of enclosure systems from Europe.  Gregory Smoak’s very interesting study of Ghost Dance “religion” gives a longer history of ghost dance than most historians, who often characterize it as a short-lived movement within Native American history.

At the same time, the shared oppression by different Native American groups produced a collective identity among them as they were forced into two-dimensional tracts of “land.” As he notes, “Scholarly treatments of the Ghost Dances and other millenarian socioreligious movements have produced valuable insights and theoretical approaches, but they have also steered the discussion toward deprivation theory” (198).

In such theories, “bullet proof shirts” become last-ditch efforts to reclaim Indigenous identity and euro-derived millenarian impulses get superimposed onto emergent “Native American” frames.  Such frames would soon become exacerbated by the passage of the 1887 Dawes Act, which imposed allotment onto Native American reservations in order to force assimilation.

As Andro Linklater’s Measuring America describes, both the idea of property and the Enlightenment idea of the decimal measurement system played important roles in the Europeans’ defining of land use in “America.”  The insatiable lust for land among euro-christians replayed the traumatic expulsions of masses of peasantry from places like the Ulster colony in now “Northern Ireland” and fear of the overcrowding of city-centers such as London.

England’s long-attempted and ultimately failed attempt to occupy and subdue all of Ireland to Anglican and Protestant forms of allotment motivated in part the seeking of “religious freedom” narratives, and thus the rhetorical trappings that would produce discourses of “civilization” in years to come. Irish Catholics did not flock to North America in large numbers until the “famine” of the mid-nineteenth century, which was based in part on poor agricultural knowledge of the limited varieties of potatoes, which the Inca had long cultivated in greater numbers.

Property itself was and continues to be a border theory necessary to primitive accumulation of capital.  Yet the notion also deterritorializes notions of land that may be locally cosmic.  The surveyor’s measuring gaze theoretically dominates and discovers, in the legal sense of the papal bulls on the Doctrine of Discovery.

Any conception of a “new polis” must distinguish itself from the hoary notions of Indigeneity that euro-christian colonizers employed to build nation states from “Indian territory.”  Critically addressing the violence of border issues and forced migration will require a deeper look at the importation of enclosures in order to make Indian reservations and the notion of ‘the camp.’  I will further address this in my next piece.

Roger Green is general editor of The New Polis and a Lecturer in the English Department at Metropolitan State University of Denver.  His work brings political theology into conversation with psychedelics and aesthetics.  He is the author of “Aldous Huxley the Political Theologian” in Aldous Huxley Annual (vol. 14, 2014 / 2015), and “Force in Religious Thought: Carl Raschke and Victoria Kahn in Dialogue” in The Journal for Cultural and Religious Theory.  His doctoral dissertation, Beware of Mad John (2013) explores connections between political theology and psychedelic literature.  He is currently working on a second PhD in Religious Studies and Theology at University of Denver and Iliff School of Theology. 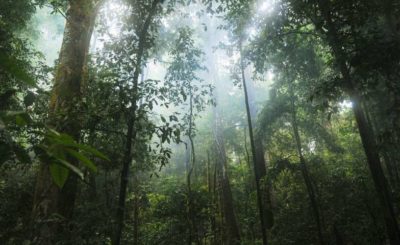 To Not Lose Sight Of The Good – Notes On The Zapatismo Ethic, Part 2 (Matt Rosen) 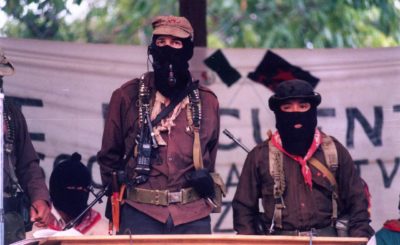 To Not Lose Sight Of The Good – Notes On The Zapatismo Ethic, Part 1 (Matt Rosen)

Welcome to The New Polis…