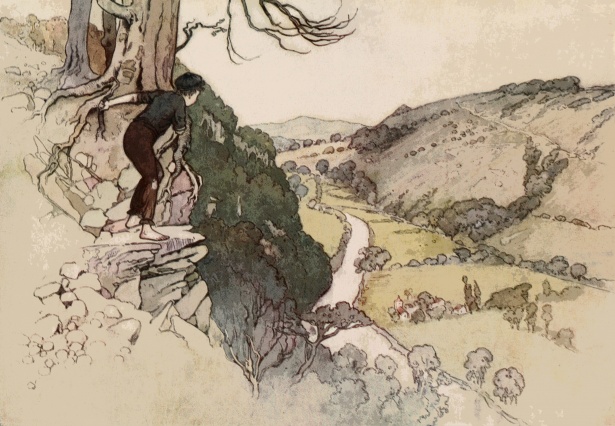 I have been working through a reading of Max Horkheimer and Thedor Adorno’s classic work of Critical Theory, Dialectic of Enlightenment.  I am particularly interested in the use of literary concepts in their critique.  As we have seen in earlier posts, their first few chapters moved historically, seeing the core of enlightenment in Odysseus as a prefigure for bourgeoisie, though they advance to modernity through critiques of Kant and Sade on morality.  Tragedy has also played a central role in their critique, and I traced that critique into recent postcolonial thought of David Scott before moving onto Horkheimer and Adorno’s famous critique of the culture industry in my previous post.

Here, I want to continue with that famous chapter, where Horkheimer and Adorno have seem the flattening aspect of capitalism through the culture industry as an annihilation of tragedy.  I have suggested that by attending to conceptions of the “endarkenment,” which ought not be confused with a Romantic “counter-Enlightenment,” we might glean more substance from their critique which otherwise reads as snobbery. That reading lends too much credence to a humanistic nostalgia embedded in the enlightenment tradition that Horkheimer and Adorno are critiquing.

Continuing with their chapter, “The Culture Industry: Enlightenment as Mass Deception,” they write, “Existence in late capitalism is a permanent rite of initiation” (124).  This language presciently describes not only the workings of the culture industry but the lifestyle experimentations among liberal youth in the 1960s and today. In the mid 1940s, they write,

Today tragedy has been dissipated in the void of the false identity of society and subject, the horror of which is still just fleetingly visible in the vacuous semblance of the tragic.  But the miracle of its integration, the permanent benevolence of those in command, who admit the unresisting subject while he chokes down his unruliness — all this signifies fascism. (124)

They quip, “The liquidation of tragedy confirms the abolition of the individual.”  Again here, I want to emphasize the importance that Horkheimer and Adorno tacitly give to the literary aesthetic notion of tragedy.  While we might be habituated to imbue the statement as a lamentation, there is something nostalgically humanist in such an interpretation.  The pseudoindividuality produced by the culture industry is a mask for a contradictory individuality fictionalized at the birth of liberalism.  As they say, “no individuation was ever really achieved” (125).

The poetic structure of the individual, what Jerome Schneewind has called The Invention of Autonomy, is there from the outset of modernity.  As Nazi intellectuals such as Carl Schmitt and Martin Heidegger also turned toward literary studies in the wake of WWII, the trajectory from Hamlet to Mickey Rooney that Horkheimer and Adorno track evidences what is politically at stake in the intellectual conversations of the era (126).

Schmitt, for example, laments the “intrusion of time in the play” in Hamlet or Hecuba, written in the late 1950s as a further engagement with the deceased Walter Benjamin, who in On the Origins of German Tragic Drama had cited Schmitt’s 1922 book, Political Theology.  As Samuel Weber tracked in the early 1990s, Benjamin corresponded with the conservative legal theorist and later Nazi on aesthetic conceptions.  Here, I am primarily interested in the centrality of the literary to these discussions.

With a reference to Max Weber, Horkheimer and Adorno write, “The National Socialists knew that broadcasting gave their cause stature as the printing press did to the Reformation.  The Führer’s metaphysical charisma, invented by the sociology of religion, turned out finally to be merely the omnipresence of his radio address, which demonically parodies that of the divine spirit” (129).  And this parody of divine spirit is indicative of the medium itself, be it radio, television, or internet.

Importantly, with respect to the American literary criticism popular when Horkheimer and Adorno were writing, New Criticism, the dehistoricizing “reset button” of liberalism reveals its contradiction with democracy.  “The abolition of educational privilege by disposing of culture at bargain prices,” they write, “does not admit the masses to the preserves from which they were formerly excluded but, under the existing cultural conditions, contributes to the decay of education and the progress of barbaric incoherence” (130).

Again, we ought to resist simply reading such phrases as pure lamentation and attend to the descriptive qualities.  With reference to culture itself, they write, “Culture is a paradoxical commodity.  It is so completely subject to the law of exchange that it can no longer be used.  For this reason it merges with advertisement.  The more meaningless the latter appears under the monopoly, the more omnipresent culture becomes” (131).  Advertising under Goebbels realizes “Art for Art’s Sake” (132).

This mass secularizing of Art has its corresponding linguistic moves.  Horkheimer and Adorno write, “The demythologizing of language, as an element of the total process of enlightenment, reverts to magic.  In magic word and content were at once different from each other and indissolubly linked” (133).  Surname use becomes less dominant, interactions more informal, assuming familiarity.  Signification “is consummated in the sign” (134), a parallel to my correlation in my previous post about neoliberalism’s attempt to remove the unconscious by making everything manifest.

Horkheimer and Adorno here point to the leftist intelligentsia’s interest in folk music at the time, because it was a way to track deeper histories of people and not merely the return to “land” and blood and soil that it has become in 21st century Indy folk and its more glamorous urban country nostalgic sentiments for strong father and evangelical sensibilities. Or, in the “permanent initiation” of which they write, we might think of about 70,000 people returning from Burning Man last week, seemingly oblivious to the iterations of “born again” christian aesthetics inherent in the solemn burning of the temple (and whatever memories burners wanted “let go of” in it) after the orgiastic burning of the man.

Such coded rituals, perhaps informed by psychedelic aesthetics within a liberal “archaic revival,” may indeed be meaningful to participants, but at the same time Horkheimer and Adorno have certainly predicted in the removal of tragedy something pertinent to the ways we should conceive of sacrifice in a post secular society.  The return of “enchantment” in our popular entertainment in recent years operates differently than Bruno Bettelheim’s Freudian argument for teaching liberal children fairytales in their raw folk forms in Uses of Enchantment, published forty years ago.

Bettelheim had argued that children need unresolved narratives from which to build mental maps by which they might, through identification, build self-narratives to deal with their own personal conflicts.  This thinking was based on a Rousseau-influenced concept of the liberal or “romantic” child.  But like the leashes we see on children from time to time today, the one-dimensionality of ritualized events permanent “permanent initiation” prevents a true catharsis.  And that persistence of liminality, of making manifest all latent content produces the individuals who react through terror to claim some sort of lost authenticity by lashing out of their reaction-formed-identities.

Such are the constant states of exception we live in, but Horkheimer and Adorno were trying to narrate this in a longer history of “civilizing” and “enlightening” processes that were incubating the impulses toward fascist and authoritarian desire.  As they close their famous chapter, “The most intimate reactions of human beings have become so entirely reified, even to themselves, that the idea of anything particular to them only survives in extreme abstraction” (136).  Those familiar with the discourse of Critical Theory will recognize this description of reification as the production of “false needs,” which compel us even when we know they’re false.

As Horkheimer and Adorno turn to their next chapter, “Elements of Anti-Semitism: Limits of Enlightenment,” they note two formations of Anti-Semitism.  The first is the “anti-race” constructed by National Socialism while the other is the “minority religious faith” established by liberalism. Both constructions, they claim, are “true and false at the same time” (137).  Regarding the first construction, it is important to be aware, and as David Moshman points out in “Conceptions of Genocide and Perceptions of History,” that there is a consensus among historians of genocide that “Nazi Germany targeted Jews as a race, not a religious group” (73).

Regarding the second, Horkheimer and Adorno write,

But by assuming the unity of humanity to have been already realized in principle, the liberal thesis serves as an apology for the existing order. The attempt to avert the direst threat by minority policies and other democratic measures is ambiguous as is the defensive strategy of the last liberal citizens. Their powerlessness attracts the enemy of powerlessness. The mode of life and appearance of the Jews compromise the existing universal by deficient adaptation. (138)

Horkheimer and Adorno then take their critique of this articulation to the formation of a Jewish “national community,” but that formation is for them built upon a persecuted identity which only reaffirms a liberal order that is inherently violent to them (139).  We hear echoes of such universalism in cosmopolitan liberal calls for “hospitality” toward refugees, but well-intentioned as such calls may be, they mask the history of civilizing empire that has created the conditions of the refugees in the first place.  Thus, as Christian ethicist, Miguel De La Torre, articulates with respect to the U.S. Immigration Crisis, it is not a matter of “being hospitable” but rather an acknowledgment that people come to get back some of what has been stolen from them.

And as Horkheimer and Adorno articulate with respect to Jewish persecution, “Anti-Semitism is a well-rehearsed pattern, indeed, a ritual of civilization, and the pogroms are true ritual murders. They demonstrate the impotence of what might have restrained them — reflection, meaning, ultimately truth.  The mindless pastime of beating people to death confirms the drab existence to which one merely conforms” (140).  They characterize Anti-Semitism as a blindness and lack of intention which allows, in the letting loose of rage, for any group to be exchanged with one another — and such is the indiscriminating nature of neoliberalism in its inheritance of Anti-Semitism, which speaks in no small way to the prevalence of evangelicalism and the rise of the Christian Right among the policy-shapers of neoliberalism, who, by the way, are both Democrats and Republicans so far as U.S. politics goes.

I will continue my discussion of Horkheimer and Adorno in a later post.

Roger Green is general editor of The New Polis and a Senior Lecturer in the English Department at Metropolitan State University of Denver.  His work brings political theology into conversation with psychedelics and aesthetics.  He is the author of A Transatlantic Political Theology of Psychedelic Aesthetics: Enchanted Citizens.