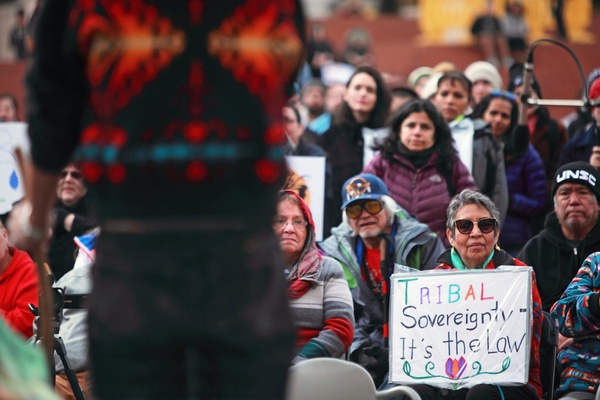 Participants are invited to join us live in the seventh of a monthly series of “Critical Conversations” (Zoom webinars) with eminent scholars from around the globe. If you are interested in joining us, please contact us by email at editor.thenewpolis@gmail.com. If you have not participated in previous seminars, please provide us with a brief sentence or two explaining your interest in this particular “Critical Conversation”. Or you may simply sign up through the registration link below.

All Critical Conversations will be recorded and republished along with edited transcripts. A related critical conversation entitled can be watched here.

How: Zoom. By Advance Registration. Please register at the following link:

Glenn Morris (Shawnee) Professor Morris’ areas of expertise are indigenous peoples in the international legal and political arena, public law, civil liberties, and race/gender and the law. He has been active in the development of international legal standards for the defense of the rights of indigenous peoples for over thirty years. Professor Morris directs the Fourth World Center (FWC), for the Study of Indigenous Law and Politics at CU-Denver, www.fourthworldcenter.org. The FWC provides resources, research and other opportunities for the examination of the condition of indigenous peoples in a global context. For the past five consecutive years, Morris, through the FWC, has trained, sponsored and supervised the participation of dozens of indigenous students with the United Nations Permanent Forum on Indigenous Issues in New York.

Tink Tinker (wazhazhe, Osage Nation) For 33 years he was a professor of American Indian studies at the Iliff School of Theology in Denver, Colorado, where he still holds the title emeritus professor. During most of that time, Tinker also was the (non-stipendiary) director of Four Winds American Indian Council in Denver. Tinker has abandoned christianity as a colonialist and Genocidal imposition on Indian Peoples in favor of recapturing the traditional worldview of Native Peoples. Although Tinker was trained in eurochristian theology and bible, he has come to see the Native experience of the interrelationship of all life and our ideal of cosmic balance and harmony as totally incompatible with eurochristian colonialist imaginary of hierarchy, one that sees reality as a manichaean hierarchical struggle of good versus evil. He is the author of Missionary Conquest (Fortress Press, 1993), Spirit and Resistance (Fortress Press, 2004) American Indian Liberation (Orbis, 2008), and numerous scholarly articles, including contributions to The New Polis. Tinker’s “Redskin, Tanned Hide: A Book of Christian History Bound in the Flayed Skin of an American Indian” has importantly drawn attention to a book of christian history bound in the skin of a murdered Lenape man gifted to Iliff school of theology, where it was proudly displayed for about 80 years.

‘Sovereignty’ is a eurochristian concept that has often been used in relation to American Indians during colonization. Historically, early contact with eurochristians took place within gift economies that were interconnected through trade throughout Turtle Island (what eurochristians call, “North America”). Through the legal fiction of the “Doctrine of Christian Discovery / Domination,” Indigenous Peoples became, in the eurochristian imagination, “subjects” to Christian Princes.

By the time of the American Revolution, various Indian Nations maintained international treaty relationships with the British, French, and later U.S. governments. As the U.S. government’s aspirations to empire unfolded throughout the 19th century, particularly following the Monroe Doctrine and Johnson v. M’Intosh in 1823, U.S.-Indian relations moved from the Department of War to the Department if the Interior. John Marshall would eventually tweak previous legal fictions to regard Indian Nations as “domestic dependent nations.”

Following the creation of the Bureau of Indian Affairs and various reservations following Indian Removal, as well as the end of treaty-making after 1870, the U.S. government increasingly used terminology of “tribes” to minimize previous international status. Plans to “civilize” and “assimilate” Indians initiated genocidal institutions such as compulsory boarding schools. All along, Christian missionaries were integral to these endeavors. Because the U.S. government has never upheld the various treaties it made with separate Nations, it sought to “legally” and genocidally dissolve them — through allotment, land encroachment, and “termination” policies throughout the late 19th and 20th centuries. The “exceptional” space of the Indian reservation would be picked up by National Socialist lawyers as precedents for concentration camps.

Various efforts have been made by American Indians seeking international recognition at the League of Nations, the later United Nations. Following the Genocide Convention, policies of “termination” spread throughout the U.S., often displacing Indians to urban “ghettoes.” While some celebrate thee 2007 Declaration on the Rights of Indigenous Peoples,  Ward Churchill and Charmaine White Face (Lakota) have argued that its diluted legal language makes it difficult for substantive effects in relation to centuries of injustices. Moreover, in Red Skin, White Masks Glen Sean Coulthard (Yellowknives Dene) has pointed out that liberal politics of recognition maintain colonial logics of domination.