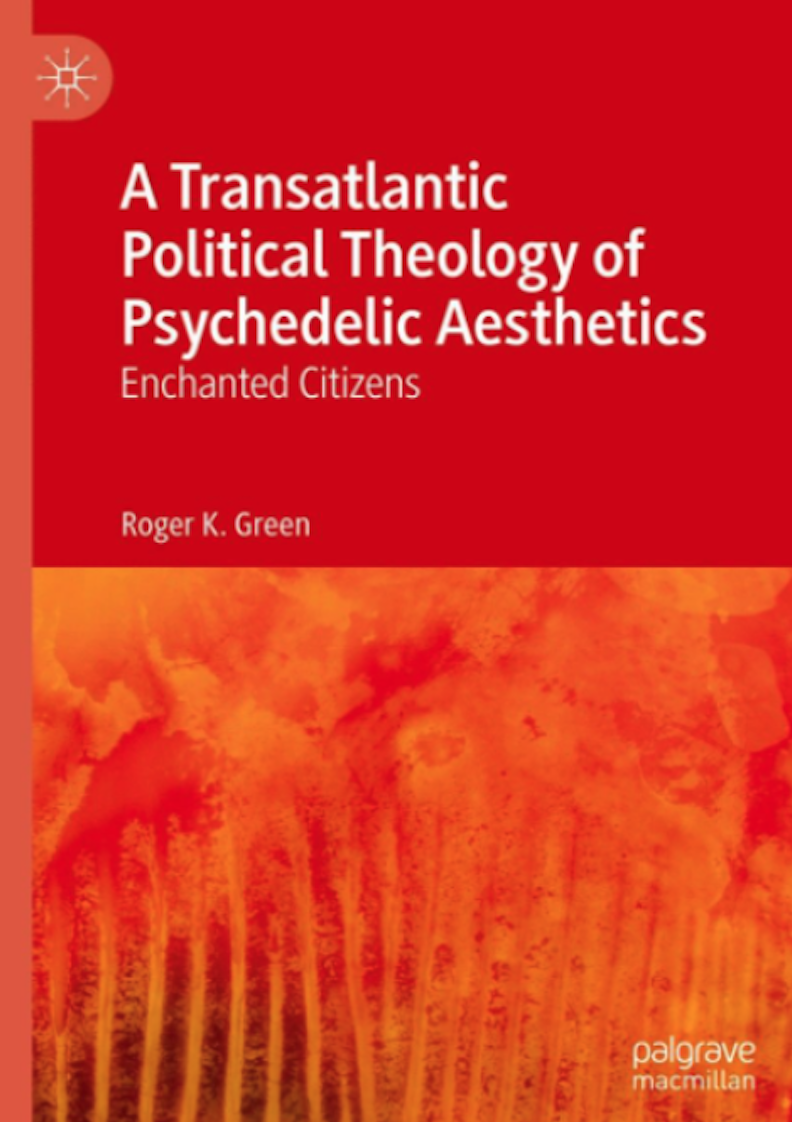 The New Polis is resuming for 2022 its regular interviews and conversations with noted academics and thought leaders on a variety of engaging and timely topics. The following Critical Conversation will kick off an ongoing series, which will feature an online conference in early September, 2022, on the topic of “deep globalization“.

Please register at the above link in advance of the seminar, and you will be given an automatic “participation link”.

In this “Critical Conversation” Roger K. Green will discuss his recent book A Transatlantic Political Theology of Psychedelic Aesthetics: Enchanted Citizens (Palgrave-Macmillan, 2019).  Critics have justifiably called this book “unwieldy.”  Its unapologetic interdisciplinary discussion is styled after earlier writers such as Walter Benjamin, whose aesthetic interests resist pigeonholing into one genre.

Framed within an emergent discourse of political theology, it suggests that taking a postsecular approach to psychedelic aesthetics helps us understand deeper connections between aesthetics and politics. In his view, “ ‘political theology’ names not just the relationship between religion and the public sphere or spheres but the underlying faith a democratic citizen or subject has in the political order and its laws.” Green argues that psychedelic aesthetics reveal the “mind-manifesting” of a European phantasy structure that transformed liberal subjectivity to think beyond the confines of the nation-state.

A “globalized” consciousness emergent in the years after the 1960s changed the ontology of democratic subjectivity.  While some have named the she shift with the loaded term “neoliberalism,” Green’s aesthetic focus asks us to reconsider our common understanding of economic and material-historical criticism.  In his talk, Roger will particularly address the following questions:  Why take an aesthetic approach to discuss crises in liberalism?  Why focus on the 1960s for discussing current crises?  What are psychedelic aesthetics? How are we to understand political theology amid the democratic crises of the 21st century?

Roger Green is a Senior Lecturer in the Department of English at Metropolitan State University of Denver.  He is the author of A Transatlantic Political Theology of Psychedelic Aesthetics: Enchanted Citizens (2019) and the recent dissertation Ayahuasca in the Wake of the Doctrine of Discovery (2020).  He has collaborated musically with Anne Waldman on Untethered I (Fast Speaking Music 2017).  He is also contributor to an edited collection by Miguel A. De La Torre, The Colonial Compromise: The Threat of the Gospel to Indigenous Worldview (2021), which celebrates Tink Tinker’s career and teaching.  He’s currently co-authoring a book with Tink Tinker on eurochristian worldview.