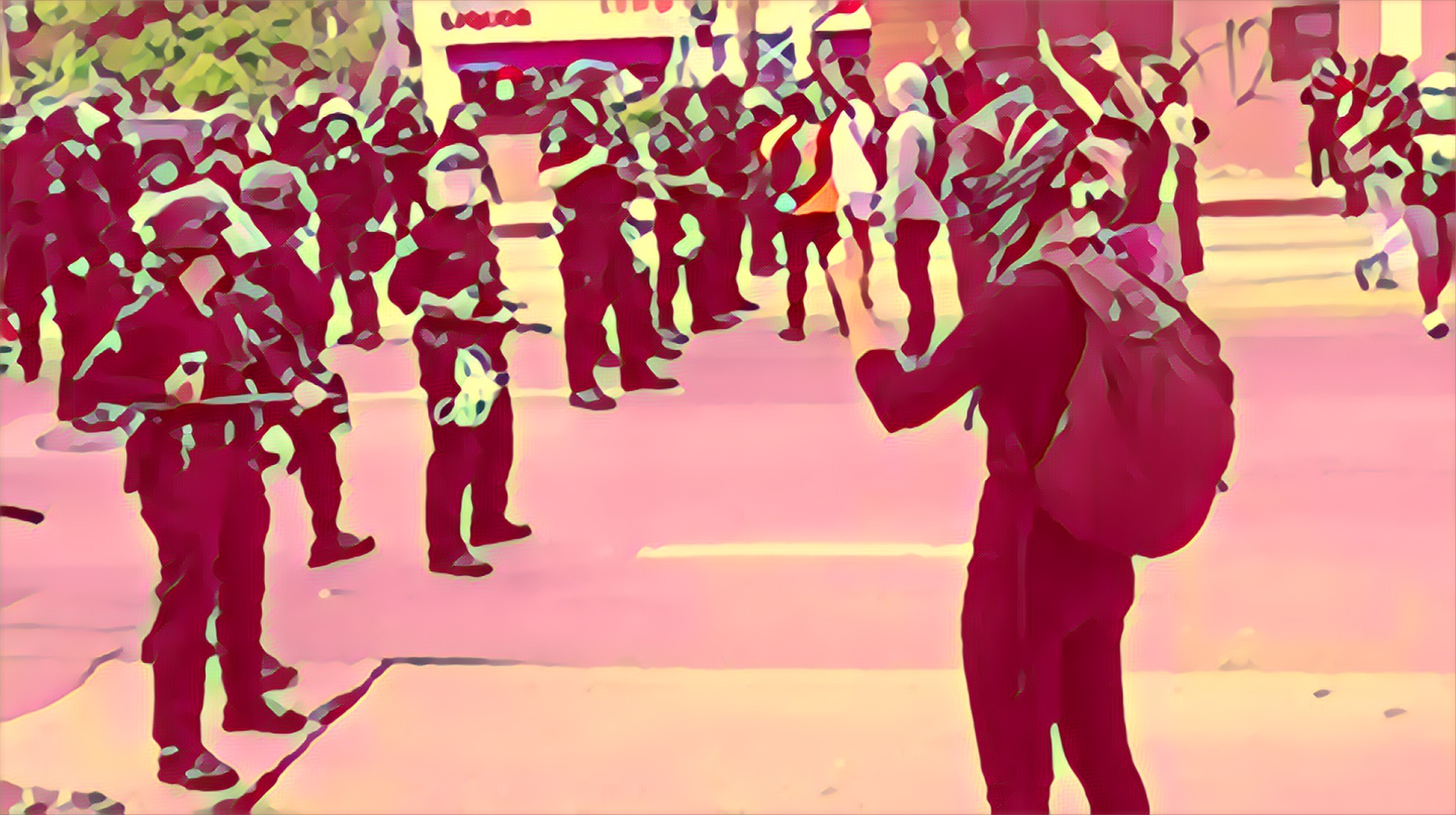 This article is republished from the author’s private blog at thoughtsoutofseason.net

“We want justice, we want anarchy”. Thus read a sign of protesters standing this past weekend in the median of a major four-lane thoroughfare near a major shopping area in northwest suburban Dallas.

Though it was a black man holding the sign, the vast majority of the protesters were young and white. Strangely, the sign epitomized the deeper and long-sequestered social and political fracturing that remains hidden beneath the surface as America writhes and burns in the wake of the Covid-19 lockdowns and the George Floyd killing in Minneapolis.

In order to understand these underlying “contradictions,” as Marx would have put it, one can go all the way back to the late 1960s when the Movement, as it was known then, began to splinter. The failure of what were essentially multi-racial campaigns early in the decade to yield any palpable kind of social and economic progress for African Americans beyond the abolition of the legalized racism of the Jim Crow era through the Civil Rights Act of 1965 spawned the so-called “black power movement” under the leadership of such outsize figures as H. Rap Brown, Huey Newton, Stokely Carmichael, and Eldridge Cleaver.

The rise of the black power movement, in turn, intimidated white leftists, who began to articulate their own curious kind of “identity politics” that became highly sexualized. Across the complex spectrum of activist politics at that time, which came to be described in an omnibus style as the New Left, what had in previous generations been articulated as working class organizing and aspirational rhetoric now was co-opted by the rising college-educated elites to serve their own agendas.

As Susan Brownmiller, a prime spokesperson for second-wave feminism during the 1960s and 1970, points out in her autobiography that what came to be known as “women’s liberation” resulted directly from the contempt many of the more radical black leaders during the latter years of the Civil Rights movement had for white women.

Brownmiller stresses that throughout the civil rights marches “white women were reminded of their second-class status as movement workers through a variety of slights.” She recalls one particular infamous instance:

The black power movement, which was born during the anti-Vietnam agitation in the San Francisco Bay area and was designed to mobilize African-American communities and at times militarize their defenses against police overreach and oppression, was eventually disrupted and crushed by the FBI’s notorious COINTELPRO operation. The white radicals, however, gradually “put on pin stripe suits”, as the saying within the New Left went in subsequent decades, and morphed into the very establishment they had sought to overthrow.

That is the nub of a profound, historical problem that lurks in the background of all the current editorializing and gratuitous snap judgment-making regarding what news footage shows about the protests and late night rioting. It was the same white upper middle class radicals who, as they aged, essentially pushed out the previous white working class political regimes that had governed America’s major cities since the late 19th century.

Over the next several decades the same white cadres became active principals of the globalized, neoliberal elites that produced the extraordinarily wealthy and prosperous urban hubs, forcing African-Americans through real estate inflation and gentrification into the suburbs, making them huddle at the shrinking margins of what were once their own neighborhoods, while herding them into minimum-wage service jobs necessary to the cultured consumer lifestyles that Richard Florida at the turn of the millennium piously referred to as the new “creative class.”

Unfortunately, the same fifty-year historical cycle is germinating once again. The black rage for both equality and justice has been thwarted not only by growing income disparities that have also impacted less educated, rural whites, but by a rapid increase in instant social awareness of brutal policing incidents that have been going on for generations.

As with the Civil Rights Movement in the mid-twentieth century, a powerful momentum is building once again to take decisive action in righting wrongs done to African Americans that are systemically entrenched with byzantine complexity. Yet, as was the case a half century ago, it is the white educated elites in control of the news media that are seeking to harness the momentum and leverage the sense of crisis and rage to make sure they are in the catbird seat when all the dust settles.

The odd, tensive double trope of “justice” and “anarchy” scrawled on the protest sign mentioned earlier, while seemingly a contradictio in adiecto so far as any plausible political theory is concerned, gives away the very historical strategy that the nouveau (predominantly) white elites have in mind. It is diametrically opposed to what black people for generations have clamored for, which is equal treatment under the law, equal access to education and good jobs, and to both a formal and concrete equality which guarantees them, as the preamble to the U.S. Constitution states, “the blessings of liberty to ourselves and our posterity.”

Celebrated black American philosopher Cornel West in recent media interviews has emphasized that “anarchy” is not what black people want but what has now appears on the historical scene as the bitter fruit of the “failed social experiment” known as America. African Americans have been both spectators to, as well as victims of, what amounts to a white-privileging institutionalized “anarchy”.

“The history of Black people in America for over 200 years has been looking at America’s failures,” West commented. “Its capitalist economy could not generate and deliver in such a way that people could live lives of decency. Its criminal justice system, its legal system could not generate protection of rights and liberties.”

Anarchy has never been the logo for black liberation. But it has been a useful tool for youthful proteges of the white neoliberal ruling class who have historically piggybacked on multi-racial activism responding to black oppression to discredit their elders, or their working class predecessors, with the aim of fostering a new “vanguard politics” with more comprehensive and class-focused goals. The Weatherman faction of the Students for a Democratic Society serves as an historical instance of how this gambit played out in recent times.

Since the 1980s and 1990s anarchism as a political and philosophical world vision gradually replaced the Marxist romance of revolution among Western radical elites. And, as Eric Kerl writing in the International Socialist Review has observed, the preoccupation with anarchy has been the almost exclusive preoccupation of white, frequently academic theorists.

The latter’s use of so-called “black bloc”methods that include concealing personal identity behind dark clothing and face masks while committing random acts of local vandalism without any symbolic content or relevance to stated political goals has mirrored an increasingly abstruse political philosophy that focuses on abstract bogeys such as “globalization”, all the while absorbing the conventional idea of the insurrectionary working class into the fanciful and somewhat hypocritical notion of a “revolutionary” knowledge class.

Michael Hardt and Antonio Negri , for example, in their well-known and influential book Multitude sound like Florida himself when they opine that “our understanding of labor cannot be limited to waged labor but must refer to human creative capacities in all their generality.” (170-1). Hardt and Negri, according to Kerl, have had a tremendous influence on this new “postmodern” variant of anarchist theory. The Seattle protests and riots in 1999 were the most obvious manifestations of postmodern anarchism with, as Kerl phrases the matter, “its elevation of tactics to the level of principle” with the explicit modus operandi of “eluding rather than smashing state power.”

Eluding state power not only protects the privileged positions of the white, neoliberal “anarchists.” It preserves the power of the state itself for which the faux revolutonary elites can gradually assume the reins.It has become more than a cliche that the looting, riots, and vandalism has muddied in what survives as a minimum public consensus the grand but challenging political aim of genuine “justice” for African Americans. It is also a truism, as some very recent news articles have shown, that most of the violence and looting is coming from white, not black, people.

“Progressive neoliberalism,” as I have written extensively about in my book Neoliberalism and Political Theology: From Kant to Identity Politics, is the long-term cultivated outcome of a spurious white radicalism in the second half of the twentieth century that created the very urban dystopia for black people that led to the George Floyd killing.

If history is repeated, it will no longer simply be tragedy but (pace Marx) pure farce.